See How Aliko Dangote Saved Emir Sanusi From Being Removed 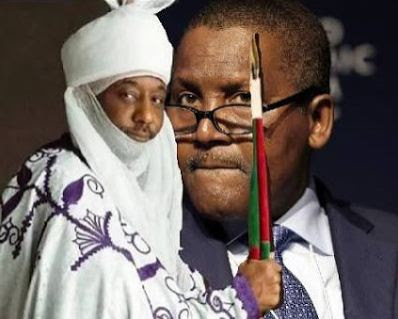 The ill relationship between the former CBN (Central Bank of Nigeria) Governor, Emir Sanusi ll and Kano State Governor Ganduje has worsened.
The worst is that the Emir has been left to face the music alone. The Arewa Consultative Forum, the Sultan of Sokoto, State Governors, and even the Presidency showed no concern on the matter.
However, Nigerian business tycoon Aliko Dangote was said to be the one calming the rift and also pleading to the Kano State Governor not to remove the Emir.
MackenzieSkyBlog gathered that Governor Ganduje gave Aliko Dangote three conditions that must be met before he would withdraw from replacing the Emir.
He ordered that Emir Sanusi ll must choose either to 'resign on his own, to be removed from office, or to accept the creation of more additional Emirates in the state.'
See also: Kano State Governor Presents First Class Offices To Four Emirs
Governor Ganduje added that this decision is based on the fact that the Emir would not stop playing partisan politics.
If not that Dangote intervened, Governor Ganduje would have gone ahead to remove the Emir from Office.
Tags # NEWS UPDATES # POLITICS
Share This