BREAKING - Court Orders The Immediate Release Of Sowore From Detention 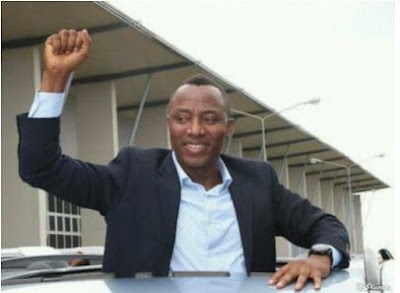 The Federal High Court sitting in Abuja has ordered the immediate release of Omoyele Sowore who has been in custody since August 3rd.
Sowore was arrested over his proposed nationwide protest he titled #RevolutionNow.
The court made the order after saying on Tuesday that there was no order allowing the detained Sahara Reporters, Mr Sowore’s further detention before the court.
However, Sowore was asked to deposit his international passport within 48 hours after his release and ordered that his lawyer, Femi Falana, be responsible for producing him in court whenever his appearance is needed.
The judge, Taiwo Taiwo, said the law provides for the freedom of all Nigerians regardless of economic or political status.
He said:

“The order of court has expired. It has not been renewed and cannot be renewed in view of the motion ex-parte earlier withdrawn.
"The liberty of all Nigerians high or low, poor or rich is guaranteed by the constitution. It’s for this end that I’m of the view that the defendant ought to be released forthwith.”

The court took the decision after being informed that Mr Sowore’s investigation had been concluded.
MackenzyskyBlog recalls that there have been growing calls for his release after the government filed charges of treason and money laundering against him.
Tags # POLITICS
Share This

POLITICS
By Okoye Patrick at September 24, 2019

Email ThisBlogThis!Share to TwitterShare to FacebookShare to Pinterest
Tags: POLITICS